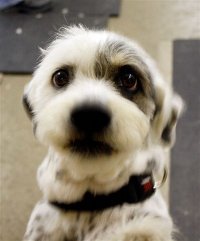 Nervous System Diseases
Rabies is a fatal viral disease of all mammals including dogs, cats, livestock and humans.  Infected wildlife and unvaccinated animals are the source of this virus.  Rabies is a major health hazard so it is extremely important that your pet be vaccinated against it.  In many cases vaccination is required by municipal law and for travel outside Canada.

Distemper Virus vaccination is essential for all dogs.  Nearly every dog will be exposed to distemper virus in its lifetime and when infection occurs it is often fatal.  Distemper virus attacks many body organs in addition to the nervous system.  Symptoms include listlessness, fever, coughing, diarrhea, vomiting and discharge from the eyes and nose.  In its final stages it may cause convulsions and paralysis.  Death may occur one to three weeks after infection.

Contagious Respiratory Disease
Canine-Cough or Tracheobronchitis
Several types of bacteria and viruses are known to cause infection and inflammation of the lungs and respiratory passages of dogs.  Primary among these are Parainfluenza Virus and Bordetella bronchiseptica.

The stress associated with boarding and increased exposure to these organisms commonly results in ‘kennel-cough’ in susceptible dogs.

Tick Borne Diseases
Lyme Disease is caused by a bacteria carried by species of ticks commonly found in some regions of Canada.  Lyme disease is very difficult to diagnose due the long incubation period and vague, arthritic, flu-like symptoms which may accompany it.  Lyme causing bacteria damage many different organs as the disease progresses including the liver, heart, nervous system and kidneys.  Infective ticks as small as the head of a pin may inhabit urban and rural lawns and gardens as well as fields and forests.  Cool, wet weather in the spring and fall increases your pet’s risk of tick exposure.

Infectious Diseases of the Liver and Kidneys
The Hepatitis virus is spread between dogs by contact with urine, feces and other secretions from infected animals.  The liver is the primary organ affected and death is possible in severe cases.

Leptospirosis is a serious bacterial disease of mammals including dogs and humans.  Many organs may be attacked by the leptospira bacteria, however the liver and/or kidney are the most frequently affected.  Symptoms of the disease may include fever, vomiting, lethargy, abdominal pain, coughing and increased urination.  Diagnosis can be difficult and if left untreated, death may occur.  Leptospira bacteria are harboured in the bodies of wildlife, rodents and livestock and are expressed in the urine of infected animals.  Any surface water which becomes contaminated by this urine represents a source of infection to your pet.  Increased rainfall may elevate your pet’s risk of contracting leptosprosis.

There are many strains of leptospirosis bacteria, however specific strains may predominate in specific geographic regions.  Common serovars in Canada include Canicola, Icterhaemorrhagiae, Grippotyphosa and Pomona.  Leptospirosis is the world’s most common infectious disease shared by both animals and man.
Request an Appointment