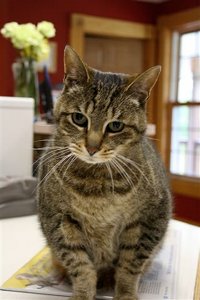 Immunosuppressive Diseases
The Feline Leukemia Virus (FeLV) attacks the immune system and leaves the cat vulnerable to a host of secondary infections.  Death most often occurs witin 3 years of infections.  Transmission usually occurs through contact with other cats.  Those cats living in multi-cat households or who are allowed to roam outdoors are particularly at risk.  There is no known relationship between FeLV and leukemia as it occurs in humans.

Nervous System Diseases
Rabies is a fatal viral disease of mammals including cats, dogs, livestock and humans.  Infected wildlife and unvaccinated animals are the source of this virus.  Rabies is a major health hazard so it is extremely important that your pet be vaccinated against it.  In many cases vaccination is required by municipal law and for travel outside of Canada.

Gastrointestinal Diseases
Panleukopenia or Feline Distemper is a widespread disease that is often fatal.  Since most cast are likely to be exposed to panleukopenia in their lifetime, vaccination against this illness is of key importance.  Clinical signs of panleukopenia include fever, depression, loss of appetite, vomiting and diarrhea.

Contagious Respiratory Diseases
Feline Viral Rhinotracheitis (FVR) is the most common upper respiratory infection in cats.  Clinical signs include moderate fever, appetite loss, sneezing, tearing, discharge from the eyes and nose, mouth breathing and coughing.  Even if successfully treated, FVR can lead to a lifelong infection.  Vaccination is extremely important.

Feline Calicivirus (FCV) is another virus that affects the feline upper respiratory system.  It accounts for approximately 40% of all respiratory disease in cats.  The severity of the infection may vary but symptoms most often include moderate fever, ulcers and blisters on the tongue.  Even if successfully treated, cats infected with FCV can become chronic virus carriers with lifelong clinical signs of sneezing and runny eyes.

Other Notable Diseases in Cats

Feline AIDS
The Feline Immunodeficiency Virus (FIV) causes Feline AIDS in cats.  It is not the same virus as the human immunodeficiency virus (HIV) which causes human AIDS.  FIV causes AIDS-like symptoms in felines including immune system suppression and chronic susceptibility to other infections.  Cats with FIV may remain apparently healthy for several years before their immune system becomes too weak to fight off other diseases.  There is no cure for Feline AIDS.  Up to 1 in 12 cats in North America test positive for FIV. As with the Feline Leukemia Virus, cats from multi-cat households and those that venture outdoors are at greatest risk of FIV infection.